Company security officials frequently summon employees for questioning about anything and everything. Such an interview can, and frequently does lead to discipline, termination, and/or the filing of criminal charges.

You shouldNEVER assume that an interrogation by company security is harmless, no matter what assurances you may be given.

If you are called into one of these investigative interviews:

Do not be intimidated, no matter what security officials say or threaten.

Your union representative, trained and experienced in these matters, will represent your interests and will serve as a witness to whatever transpires at the interview.

The rep will be able to swear as to what you did or did not say, which could be crucial in the event the matter becomes serious and might result in discipline, discharge, or criminal charges.

Call our office 1(800) 698-8329 to request an "Interrogations Rights Statement Card" or just click the images below to print the on line card. Present it before the interrogation.

For a printable version 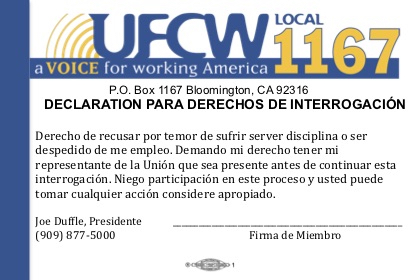